The subject that will be discussed in this article is the Textile Mill museum based in the Helmshore north of Manchester.

Helmshore mill was actually built as two separate Mills. In 1796, Higher Mill was built for William Turner. In the 1820s, the Whitakers’ Mill was built by the Turner family.

In February 1789, the Turner family bought some land to build their own Mill. They bought the land for £725 and they built Higher Mill. However, one of the members, William Turner dropped out. In his will, he asked that the Mill would be sold after his death which came around in 1852. Five years later, the Mill had been destroyed by fire but was then rebuilt only 3 years later by Edward Turner. Not long after, the Mill started spinning cotton again.

Platt Bros & Co Ltd owned a large and varied collection of historic Textile machines which they thought was a good idea to put into the Helmshore Mill. In 1975, the Lancashire county council stepped in and gave them a 99-year lease to help take the pressure off them as they had to maintain a museum and the two Mills. Now, the Textile Museum has separated into three different sections; the wool story; the cotton story; and the spinning floor.

Helmshore Mill and Queen Street Mill was used for interal footage in the BBC’s Tv Addaptation of Elizabeth Gaskell’s North and South. 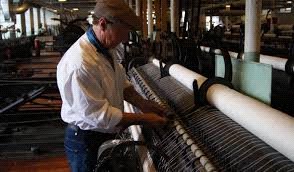 The Wool story shows visitors how they used to produce Ammonia which was needed for fulling. The story contains the water wheel, fulling stocks and clay pots. Then, later on, it shows the box system. This shows the tenter frame with the tenterhooks to show how the cloth was dried without any shrinking.

The Cotton Mill story shows the hand weavers’ cottage which has a frame loom and a hand-thrown shuttle. There is also an original Arkwrights first carding machine which would have been from around 1790 and also an Arkwrights water-frame.

The Spinning floor is where they had the spinning mules which are where the rovings went. They actually had two of these floors in the Mill, not just one.

In November 2015, the Lancashire County Council announced that the Mill would be closing along with a few other places. The Council leader described as “the financial challenges facing the county council as we deal with relentless cuts to central government funding combined with rising demand for our services.”

However, in August 2018 it was announced that the Mill would be reopening, for dates please check their website below.

To visit the Helmshore Mill Textile Museum click on the link:

If you would like to learn more about historic building why don’t you check out our sister company Sympathetic works ltd course page.

This article was written by, Lydia Evans