“A herbaceous plant not valued for use or beauty, growing wild and rank, and regarded as cumbering the ground or hindering the growth of superior vegetation… Applied to a shrub or tree, especially to a large tree, on account of its abundance in a district… An unprofitable, troublesome, or noxious growth.”
The New shorter Oxford English dictionary on historical principles has noted about weeds.

Known to cause trouble, weeds have noted beneficial properties. Weeds have caused problems for farmers, homeowners and site owners, weeds such as Japanese knotweed and Himalayan balsam are the main culprits.

For humans as well as animals, there are weeds that are poisonous and so it is important to keep them under control.

In 2015, the news reported a weed that can burn skin and cause potential blindness.

Many find it hard to imagine a simple weed that can cause harm to a structure, but many are surprised by what damage can be cause.

However, what can each do?

The Japanese knotweed is commonly found in urban areas, riverbanks and waste ground. They are common in months of April to October, and not reliant of shadowed areas, they do not stay in woodlands.

The knotweed has no barrier when it comes to growth, it will grow through structures such as tarmac and flooring in houses. 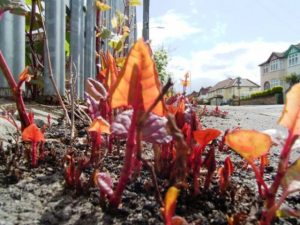 If there are any gaps in materials the knotweed will grow through; it can also create risks of flooding if leaves clog waterways.

From April to October you can find the weed growing, a tiny root (the size of your fingernail) can establish itself as a plant in just ten days.

Recognised by its bamboo-like stem, white flowers (which are produced in autumn) and shovel-shaped leaves.

If you discover the plant on your property contact a certified company who can handled invasive plants.

It is listed as the world worst invasive species.

Commonly found around waterways, ditches or damp meadows, Himalayan balsam is an invasive plant, which is able to project its seeds up to 4 meters up and down streams. The ability to germinate in one season and become established, attracts bees due to its prolonged pollen season, this is feared that insects will neglect native plants.

Not only does this plant spread and germinate quickly, the leaves and roots of the Balsam can cause blockage in rivers so when there is mass downpour, the water cannot use its original course. Nevertheless, in the winter months the plant dies back leaving riverbanks bare and unprotected, thus causing erosion and ground instability. 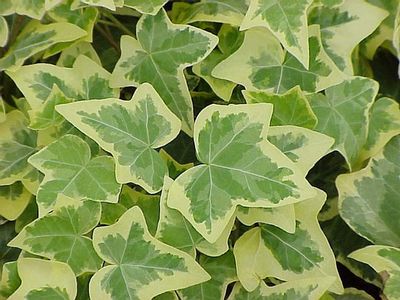 English ivy known for its evergreen thick foliage and aerial roots, this support system is what causes the most problems. Ivy is only a problem if you have pre-existing structural problems such as cracking in brick or mortar; this causes further structural damages as the plant grows into the cavities and roof spacing, its dense foliage hides defects in the fabric of the building and can hinder maintenance work. This climbing plant may look pretty on your building, but what it causes is not.

It is suggested that ivy is a cause of damp in building following down pours, the through is the vegetation slows down the drying process.

This is true of southwest facing walls where the rain is driven by winds. Nevertheless, it is noted that North and East facing walls the evergreen ivy causes slight drying on the mortar and can provide a degree of insulation in winter.

If the ivy is properly controlled and all masonry faults corrected there should not be any problems from this plant.

The main key is to keep the growth away from gutters, windows, doors and paintwork.

Make note that unwanted pests may take refuge in the shelter caused by the ivy, causing other problems.

Trees can range in height and width, no matter where you plant them; remember the tree is as big underground as it is with its canopy.

At to the point of maturity a tree will show any problems with the structure.

If the canopy is close then roots will be also.

Roots of trees will not move for your utilities. They don’t just interrupt your water supply and/or sewage removal they can cause literal movement causing the building to lose its sound structure. The same science used to understand a swelling door can also apply to a living tree, this cause the instability of the ground work and if the foundation are not equip to such movement the house will show signs of subsidence. To correct this matter is extensive and expensive.

Reduce the productivity of agriculture

Plants that are unwanted and unintentionally grown known as weeds; these plants effect the growth of crops (purposefully grown plants) by taking space, light and nurturance out of the ground, reducing the number of the crop plant.

There are plants that are hazardous to farm animals as well as humans, but if a weed is not poisonous and does not affect necessary plant growth then farmers will leave them to grow as food for all animals.

What weed can cause a fine?

For more information on the prevention of the spread of harmful invasive and non-native plants click here.

Are there any benefits from weeds?

The term “weed” has a negative association, many plants commonly known as weeds have beneficial properties.

Weeds are used for food or herbal medicine; by using their root or leaves, such as the lamb’s quarter and dandelion. Weeds in East Asia are made into soup and medicine; Burdock is common over much of the world.

The main benefit to weeds is that they are plants, and all have learnt in school plants help produce oxygen. Once a weed has died, it decomposes rejuvenating the soil it grew from, returning nurturance back into the ground.

Weeds may act as “living mulch”, providing ground cover that reduces moisture loss and prevents erosion. Weeds may also improve soil fertility; for example, dandelions bring up nutrients like calcium and nitrogen from deep in the soil with their taproot, and clover hosts nitrogen-fixing bacteria in its roots, fertilizing the soil directly. Some ‘weeds’ are beneficial for attracting certain insects, which protect crops from harmful pests. Weeds can also prevent pest insects from finding a crop.

Common weed in European wheat fields, corncockle are sometimes grown as a garden plant; like many other weed type plants. Some farmlands weeds are permitted, but why is this? In the right place, in the right quantity weeds like docks with their broad-leaves can be beneficial for birds and insects.

Interesting fact Japanese’s Knotweed – a sprout can be eaten in stews; the taste is likened to sour rhubarb.

Himalayan Balsam is also edible such as the green seedpods, seeds, young leaves and shoots and the flowers are good for jam or parfait.